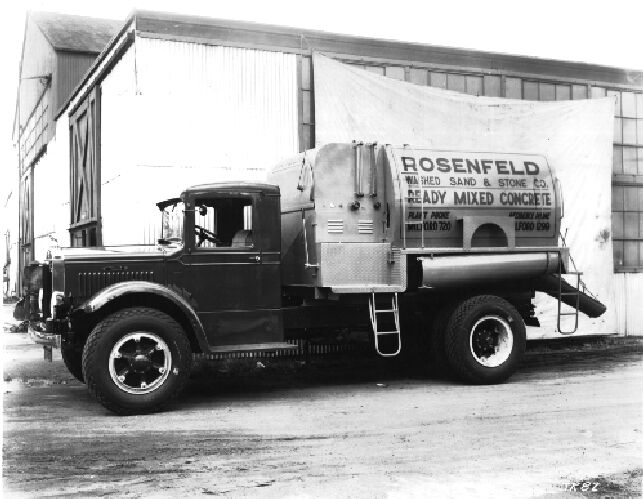 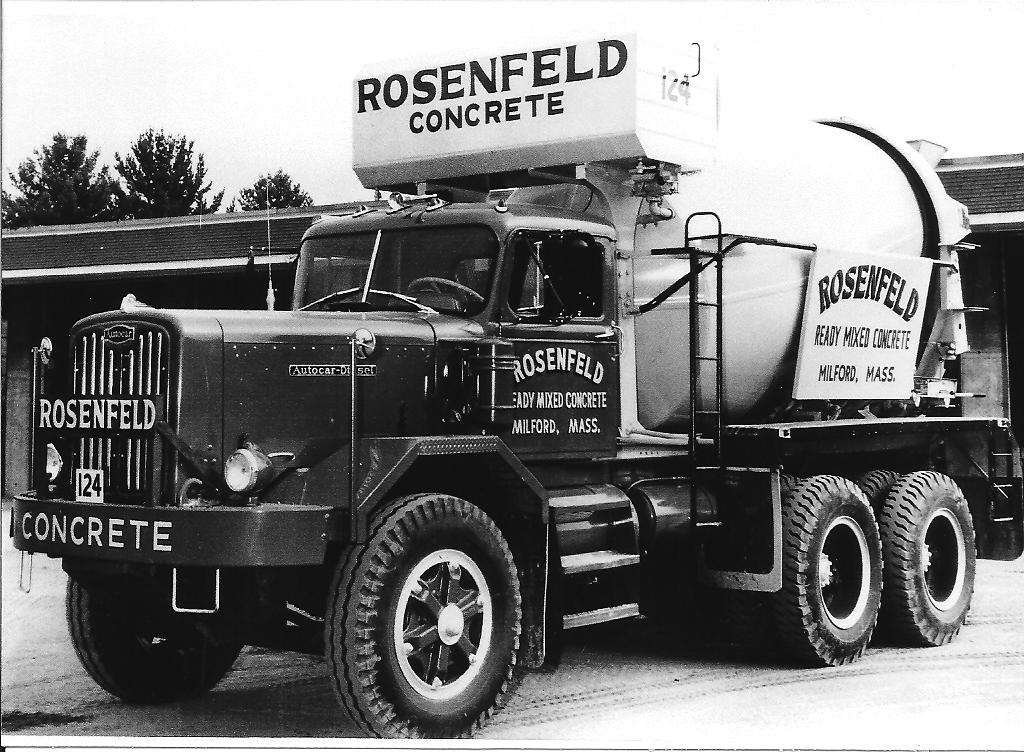 A brief history of Rosenfeld Concrete and the Rosenfeld family

Benjamin was born in Russia on February 01, 1902. He owned and operated Rosenfeld’s Garage on Spruce Street in Milford for over 50 years. He was married to Bessie (Solomon) Rosenfeld and they had 2 children, Joel and Abram. Benjamin died June 14, 1979.

Fannie was born in Russia on July 18, 1903. She was married to Harry Janock and they had 2 children, Irving and Helen. Fannie died September 1, 1986. Their son Irving joined his uncle Joe at Rosenfeld Concrete shortly after graduating from Tufts University. He went on to become General Manager and directed operation there for 28 years.

Abraham and Annie had 3 other children, Nathan, Joseph and Sarah all born in Massachusetts.

Nathan was born in Medway, Massachusetts on January 31,1906. He was an Attorney in Milford over for 50 years and was a member of the Massachusetts StateLegislature for many years. He was married to Mary (Tullio) Rosenfeld. Nathan died April 1, 1982.

Joseph was born in Medway, Massachusetts on December 3, 1907.

In April of 1910 Abraham and his family were living on Beaver Street in Milford, Massachusetts. On July 20, 1911 he bought 16 acres of land on Cedar Street in Milford and this became the family residence. Abraham was a cattle dealer and butcher. In 1922 he started a sand and gravel business close to his home on Cedar Street and Joe worked with his father in the business. Joe graduated from Milford High School in 1925.

Abraham bought 97 acres of land in Hopedale, Massachusetts on November 2, 1931 from Clayton W. Gaskill. On August 20, 1932 Joe leased the land in Hopedale from his father and started the Rosenfeld Washed Sand and Gravel Company. The lease was for ten years and the rent was 10 cents a yard for all gravel removed, 10 cents a ton for all stone used or removed from the premises, $15.00 per day for use of a Gas-Automatic Shovel and $10.00 per day for each days use of a 5 ton Mack truck. On December 12, 1936 Abraham conveyed the land to his son Joe as a gift.

Joe purchased other properties in Hopedale, but they were not part of the land that would become Rosenfeld Concrete.

From the small start in Milford in 1922 and in Hopedale in 1932 the company grew to have plants in Dedham, Plainville, Ashland, Walpole, Framingham and Weymouth, Massachusetts.

In the late 1930’s Joe purchased his first concrete mixer, a Mack model BX with a 5 yard Ransom mixer.

On May 16, 1949 Abraham Rosenfeld died as results of an accident at a company gravel pit in Bellingham, Massachusetts where he was supervising work. Sand from this gravel pit was taken to the Hopedale plant for processing.  Abraham’s wife Annie died on November 15, 1960.

By December of 1962 the company had grown to having 80 concrete mixers and by August of 1965 they had 98 mixers. Counting other types of trucks that would bring the total to well over 100.This would have probably made Rosenfeld Concrete the 2nd largest employer and tax payer in Hopedale, after Draper Corporation.

Some of Rosenfeld Concrete’s major projects were the Massachusetts Turnpike, Cushing Hospital in Framingham and Brandeis University in Waltham.

Joe sold the company on June 25, 1985 to Boston Sand and Gravel. The trucks are still painted and lettered for Rosenfeld Concrete and operate out of Hopedale and Walpole. The Rosenfeld plant in Framingham has been closed.

At the entrance to the Hopedale plant is a plaque that reads.

IN HONOR OF
JOSEPH ROSENFELD
ON THE ANNIVERSARY OF HIS 80TH YEAR
COMPANY FOUNDER – ENTREPRENEUR
BANKER – PHILANTHROPIST
FRIEND OF THE COMMUNITY
WHO HAS RETURNED SO VERY MUCH
TO THE TOWNS WHERE HE HAD
HIS BUSINESS AND HIS HOME
DECEMBER 3, 1987

Thanks to Paul for the pictures. Here’s what he wrote when he sent them:

I have attached some of my Rosenfeld pictures that date back prior to the sale to Boston Sand and Gravel in 1985. After BS&G took over they renumbered the trucks into the 300 series. 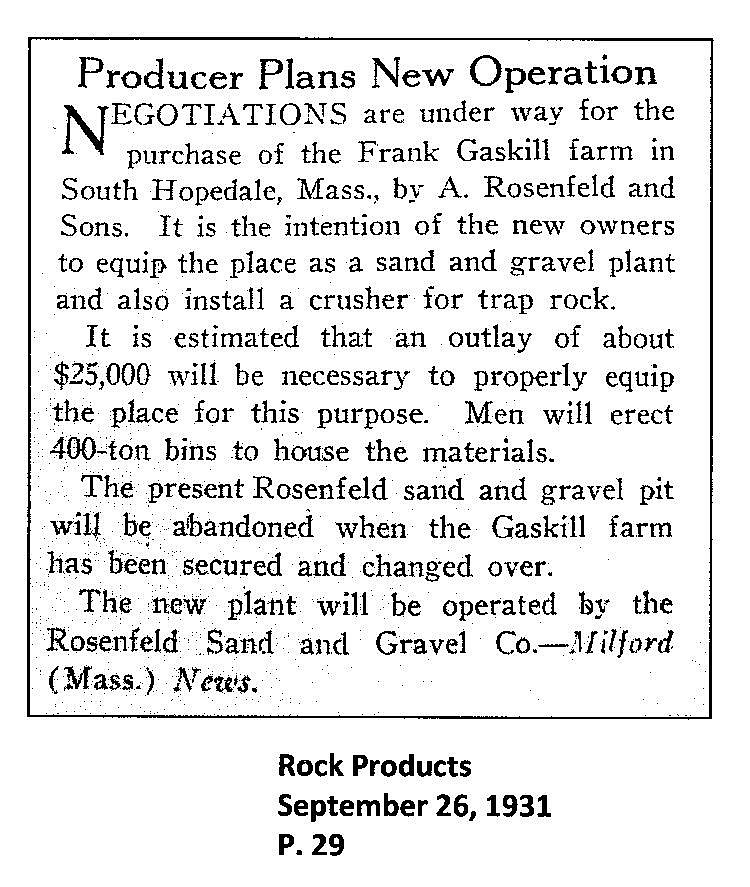 I have attached an article that I received from Paul Vassalotti who found it in Rock Products Magazine. The land was purchased on November 2, 1931 by Abraham Rosenfeld from Clayton W. Gaskill. The deed is recorded in book 2553 on pages 587 and 588 of the Massachusetts land Records for Worcester County. 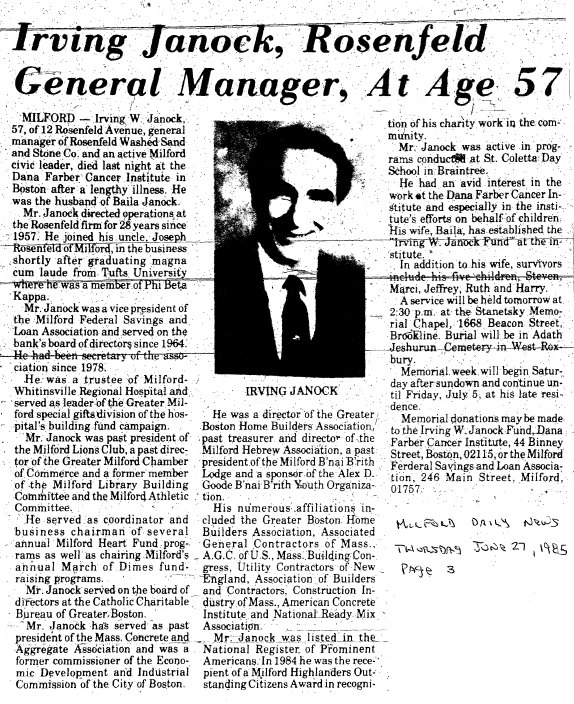 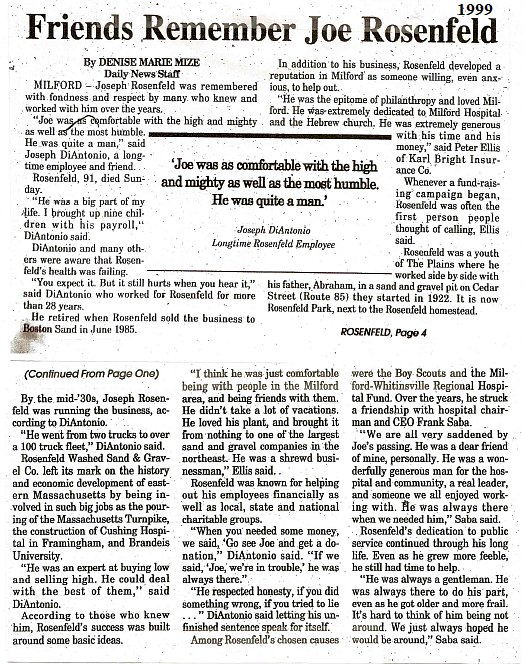 Portrait of Joe Rosenfeld by Doris Daniels Cox. Thanks to her son, Carleton Cox, for sending it.