The Wedding of William Draper and Lilla Joy

Waiting for William (A few days from Lilla Draper’s 1873 diary.)

The Wedding of William Draper and Susan Preston

Edith Draper Blair   Daughter of General William and Lilla Draper; married Montgomery Blair, Jr.-  family of the original owners of Blair House in Washington, D.C. The link goes to a condensed version of Edith’s diary written when she was a student at Miss Porter’s School. At one time the entire diary was online, but that’s no longer available.

Margaret Draper’s Wedding  and articles about her in the news through 1925.

William F. Draper (William the artist, not William, the general.)

Bristow and Queena Draper and their children

Photos of the Gov. Draper family taken in 1911.

Draper Family Feud (An account of it by Gov. Eben S. Draper.)

The Princess Ends the Feud (Or was it Dorothy Draper Gannett …. or someone else???  You decide.)

Rich and Famous – (Drapers in the news)

Pre-1910 photos of the Draper shops

The Dutcher Family and Business        The Frank Dutcher home

The Dutcher Family and Business by Peter Hackett

The History of Spindles (By William F. Draper, on the Harvard U. Library site.)

Draper Products   (Although best known for their automatic loom, the company also manufactured many other products. This article tells what they were doing in 1896.

The Development of the Northrop Loom

Looms at Work   (Pictures of two mills with large numbers of Draper looms at work.)

Now and Then at the Main Office

Strike of 1913 – The Unmaking of an Industrial Utopia

Teaching unit on the strike

Striking Women: Massachusetts Mill Workers in the Wake of Bread and Roses, 1912-1913.

Eben Draper Bancroft – Vice president and director of Draper Corp at the time of his death in 1925.

Alterations to the plant (Brick facade on Hopedale and Freedom streets, and much more. 1934.)

Workers at machines in the shop

Draper shop organization chart, c. 1950 (Lots of familiar names for those of you who remember the company at that time.)

Harry Pickard retirement party, 1950 (Many photos of Draper management at that time.)

Workers at their machines and benches

Cotton Chats: The Voice of the Draper Company, by Anita Cardillo Danker

Miscellaneous Draper photos from the 1940s and 1950s

Draper phone directory from the 1950s (Over 20 pages of names from that era.)

Cartoons of Draper employees in the 1950s.by Arthur “Red” Pennington.

Photos of Draper employees in 1961 report

A View from the South

A View from the  Southeast

Draper Foundries in the Rockwell Era

Mike Cyr   (Working in textile mills, including one that used Draper looms.)

Draper work diary by John Callery (A view of the last years, month by month.)

The End Is Near (Two Milford News articles on the announcement of the closing of Drapers.)

It’s All Over (A Milford News article from 1980 about the closing of the Draper plant.)

Drone view of the Draper plant before demolition.

The Decline of a Technological Leader: Capability, Strategy, and Shuttleless Weaving, 1945 – 1974.    (In this paper, William Mass, writing at the University of Lowell, with funding from the University of Connecticut, takes a close look at decisions made during the final years of Drapers.)

The “other Drapers”   A little about some of the many Drapers in Hopedale who were not related to the “corporation Drapers.”

Hopedale and the Drapers, 1888 (The Springfield Daily Union.)

Hopedale and the Drapers   (A summary of Hopedale history written in 1909.)

Hopedale and the Drapers, 1910 – (The Boston American)

The General Draper Library   (Milford News article on the dedication of the library at Hopedale High School in 1929.)

White City   (Memories of that Draper neighborhood by John Chute.)

The publication of Five Generations of Loom Builders, 1950

Site Protection (Preserving the appearance of the town.)

The Final Chapter by Peter Hackett

A Draper loom in the 21st century – Pete and Laurie Eaton’s amazing restoration of a Draper loom.

And another Draper loom restoration story. Michael Masterson and the X-3.

Shuttles and the Swannanoa Museum

The Little Red Shop in the Draper Era

Joseph Bancroft (Lilla Bancroft Bracken Pratt’s story of her father’s life. The Bancrofts have been included here because, in addition to Joseph’s position with the Draper Company, the Drapers and the Bancrofts were related. Sylvia’s sister Anna was married to Ebenezer Draper, and her sister Hannah was married to George Draper. Also, Joseph was an executive with the various Draper companies nearly all of his working life, and president of Draper Company for the last couple of years of his life.

Sylvia Bancroft (An account of her life written by her daughter, Lilla Bancroft Bracken Pratt.)

Almon Thwing (Included here because of Thwing’s relationship to the Draper family and company through three of his sisters.) 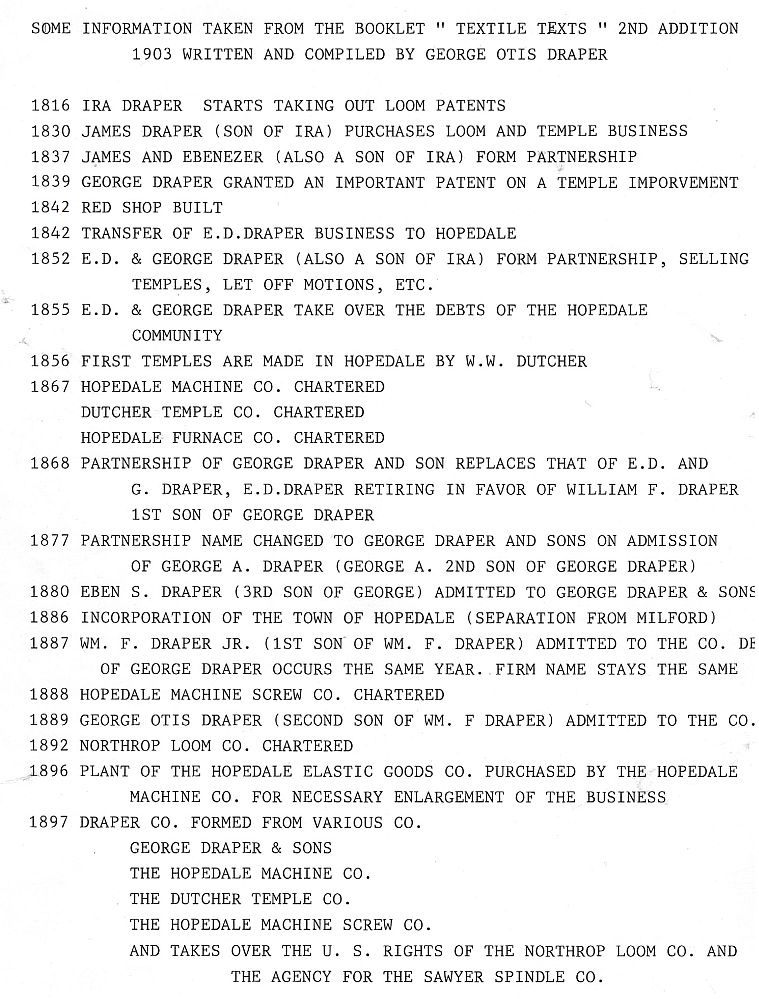